Book Review: 'Notes from an Apocalypse: A Personal Journey to the End of the World and Back' by Mark O'Connell 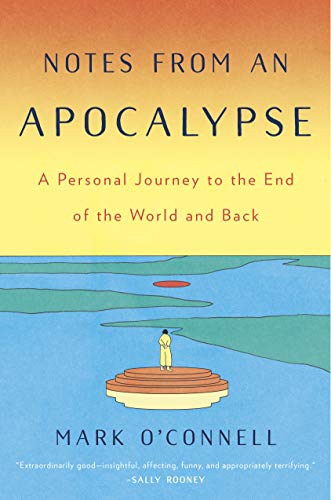 There are a lot of people who think our time is up. That is what Notes From An Apocalypse explores. It is a very dark depressing journey, which fortunately ends on a note of hope. Mark O’Connell is a very self-conscious writer. He is aware of the contradictions in everyday life, the conflicts in his own being, and the privilege he enjoys as a white, middle class Irish author. His examination of where we seem to be heading exploits all of those things in his own personality. For example, he points out the invention of the ship was also the invention of the shipwreck. Every silver lining, as they say…

O’Connell focuses on doom. He drives himself to depression researching things like preppers, who are stocking up for a Mad Max future of every man for himself. He notes the obvious selfishness of it, ignoring the suffering in the world or even the neighborhood in favor of guns, powdered imitation foods, and bunkers. It’s a white, patriarchal vision he can’t relate to. But then, O’Connell is a self-proclaimed socialist, so he carries the weight of the world on his shoulders. He says: “What had made America great was the western progress of white migrants. It was the northern progress of nonwhite migrants that threatened it.”

He visits a developer selling those bunkers in South Dakota, and traces the route of Peter Thiel, who bought himself a New Zealand passport and lots of land to protect himself from the end times he also thinks are coming in his lifetime – just not in New Zealand, apparently. O’Connell says “the freedom to act purely in one’s own interest, without having to consider the interests of others […} seemed to me the most bloodless and decrepit conception of freedom imaginable […] The notion of escaping ”beyond politics” was, in other words, inescapably political. It was a dream of dissolving all entanglements with, and obligations towards, other people. This amounted to nothing less, in my view, than the dissolving of life itself.”

Then, way beyond New Zealand, the Mars people come under scrutiny. They think moving to Mars and living entirely underground will give them freedom, no government, no regulations, and a new life under a cold planet. O’Connell doesn’t state the obvious, but if that’s what will save humanity, they could burrow under Montana and achieve the same thing in proper gravity, air and water.

O’Connell goes so far as to visit Chernobyl, a depressing monument turned into a tourist trap, exhibiting all the trappings of the set of a sci-fi endtimes film. Basically, he goes to the ends of the earth to find who is preparing for the end of the world, and what that might look like.

And he tells it all to his therapist, who spends her time trying to point him towards cheerier thoughts. She also has to deal with his fear of moths. The thought of one brushing against his skin is enough to make him leave the room. It’s a very different premise for a book, but O’Connell is an intelligent analyst, and he makes it work.

In the end (of the book), it is his two young children, possessing no agenda of their own, who give him hope and inspiration that not only must life go on, but that this is the only time for life to go on. There are no options offered.

Editor's note: This review has been published with the permission of David Wineberg. Like what you read? Subscribe to the SFRB's free daily email notice so you can be up-to-date on our latest articles. Scroll up this page to the sign-up field on your right.
Share
‹
›
Home
View web version